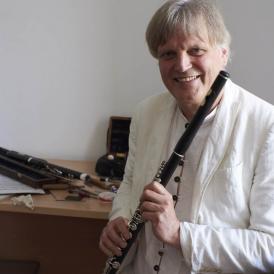 He was born in Heiloo (The Netherlands) in 1961. He studied at the Sweelinck Conservatory with Koos Verheul and Harris Starreveld in Amsterdam, and later at the Banff Center for Arts with Geoffrey Gilbert in Alberta, Canada.

He has been awarded many prizes, such as the second prize at the Willem Pipjer competition with pianist Bernd Brackman (1981), the Jury’s Special Prize of the Jean-Pierre Rampal Competition in Paris (1987), and an Edison for his recording of Dutch contemporary flute and piano repertoire, again together with Brackman (1997). In 1998, the Boston Globe named him “Musician of the Year”.

His professional performing career has been very intense. He has been member of the Netherlands Orchestra and the European Community Youth Orchestra, under conductors Claudio Abbado and Leonard Bernstein. Since 1997, he is principal flute of the Boston Symphony Orchestra and since 2004 of the Mozart Orchestra and the Lucerne Festival Orchestra. He has been a solo player with the Amsterdam, The Hague and Berlin Philharmonics; the Royal Concertgebouw, Boston Symphony and Boston Baroque Orchestra. He has played many concertos by Mozart, Joliver, Martin, Gubaidulina, Bernstein, and Ligeti; under conductors such as Claudio Abbado, Seiji Ozawa, Bernhard Haitink and Pierre Boulez.

Regarding chamber music, he has played with cellist Iseut Chuat and collaborated with the Indomeno, Viotta and Gaudier ensembles; the Ludwig Trio and the Orlando and Amati Quartets. He has performed concertos composed for him by Bernhard Heiden and Paul Desenne, and from 1989 to 1997, he was soloist of the Chamber Orchestra of Europe.

He has made various recordings for Philips, Decca, DG, Vanguard Classics, Schwann-Koch, Pony Canyon, NM-Classics and Boston Records. In 2004, he recorded Mozart’s Flute concerti with the Boston Baroque Orchestra for the label Telarc.

Besides all his performances as an artist, he has developed an active academic career. He has taught at the Rotterdam Conservatory (1988-1994), the Indiana University (1994-1997), Boston University and the New England Conservatory (1997-2001), as well as at the Hanns Eisler Hochschule in Berlin. Since 2002, he has taught flute at the Geneva Conservatory and since 2006, he has been an invited artist of the Wind Department of the Institute of Chamber Music of Madrid. Since 2009, he has been the Professor of the Flute Chair at the Reina Sofía Music School of Music.