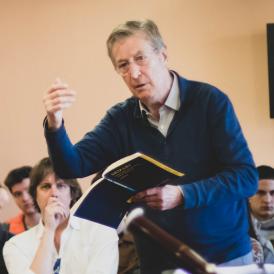 Klaus Thunemann was born in Magdeburg (Germany). Initially a piano student, he changed to the bassoon at the age of 18. He studied in West Berlin, where he obtained his diploma in 1960.

Between 1962 and 1978 he was first bassoonist with the North German Radio Symphony Orchestra (NDR). He was the only winner in the vassoon category in Germany's ARD Radio Competition in Munich in 1965.

He has played as a soloist with numerous orchestras and has collaborated with the Ensemble Villa Musica in Germany.

For the past 20 years he has played on a regular basis with oboist Heinz Holliger and is invited to major festivals throughout the worl.

He has taught master classes in the USA, Japan, Sweden, Austria, and in the 2007, 2008 and 2009 edition of the 'Meeting of Music and Academy' event in Santander. He has been a professor at Berlin's Musikhochschule Hanns Eisler.