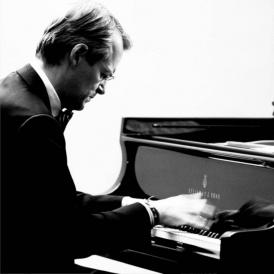 "Luis Fernando Pérez is clearly among the most individual and gifted pianists of today's generation. And, as in his most recent disc of Granados's Goyescas, his playing is audaciously personal and has an improvisatory freedom and coloration very much his own."
This was how Bryce Morrison described in the Gramophone magazine his discovery of Luis Fernando. A student of great artists and pedagogues such as Dimitri Bashkirov, Galina Eguiazarova, Alicia de Larrocha and Pierre-Laurent Aimard, his life took a substantial turn after recording Isaac Albéniz's "Iberia" on the label Verso: critically acclaimed, this launched his career to the international arena, where he is consecrated as an expert in the Spanish repertoire.
He has been invited by the prestigious festivals Schleswig-Holstein, La Roque d'Anthéron, Richter in La Grange de Meslay, Jacobins in Toulouse, Santander and Granada, the Musical Fortnight in Donosti and Musika-Musica of Bilbao. He has acted as soloist with the Symphony Orchestra of Barcelona and National of Catalonia, Real Filharmonía of Galicia, Symphony of Bilbao, Symphony of the Principality of Asturias, Orchestral Ensemble of Paris and Kanazawa, Symphony Warsaw, Symphony of Euskadi, the RTVE Symphony and the National Orchestra of Spain, the Franz Liszt Chamber Orchestra of Budapest and the Mannheim Chamber Orchestra. He has performed under the batons of José Ramón Encinar, Antoni Ros Marbá, Günther Neuhold, Hernán Hernández, Kazuki Yamada, Jean-Jacques Kantorow, Peter Fraas, David Lockington, Alexis Soriano, Enrique García Asensio, Carlo Rizzi and Jesús López Cobos.
The awards he has received certify the professional and artistic maturity of Luis Fernando: Franz Liszt in Italy, Enrique Granados in Barcelona (Alicia de Larrocha Award) and the Albéniz Medal. He has been highly acclaimed by the French critic, who sees him as the representative of the Spanish musical renaissance: Scherzo, Exceptional Disc; Classica, Choc du Disc and Choc de l'année; Diapason d'Or.
Besides his artistic engagements, he is member of the faculty of the Marshall Academy (Barcelona), and Katarina Gurska Superior Center while he teaches also within degree in Music Performance at the European University (Madrid).
His future commitments will take him to Madrid, Valencia, Bilbao, Alicante, Barcelona, Oviedo, Gijón, Santiago de Compostela, Palma de Mallorca, Bordeaux, Tokyo, Toulouse, Istanbul, Paris, etc.