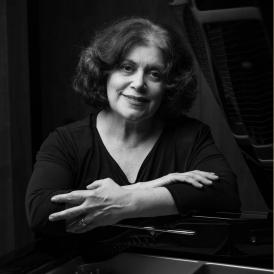 Born in Havana (Cuba) in 1952. Since the 2000-2001 academic year she is Accompanying Pianist Professor at the Reina Sofía School of Music’s Fundación Ramón Areces “Alfredo Kraus” Voice Chair with professor Francisco Araiza and Rocío Martínez, and earlier with Tom Krause, Teresa Berganza, and Ryland Davies, among others.

She started her music education in her hometown. She later moved to Venezuela and obtained a Diploma as Piano Professor at the Juan Manuel Olivares Conservatory in Caracas. At the same time she took courses at the Andrés Bello Catholic University, where she graduated in Letters and Humanities.

She started as soloist and accompanying pianist in Venezuela, where she gave recitals throughout the country, as well as abroad as cultural representative of Venezuela. She has also participated in recitals sponsored by the Organization of American States (OEA) and the U.S. Smithsonian Institute. She has recorded several times with representative personalities of Latin-American vocal arts.

She started her activities as Professor of Repertoire at the Taller de Opera in Caracas. In 1985 she was hired by Teresa Carreño Theatre as Piano Preparatory Teacher during the opera seasons, activity she carried out until 1996. During that period she also participated in the preparation of the Opera season of Ateneo in Caracas, the National Opera Company, and the Baroque Camerata also in Caracas.

In 1986 she was hired as Professor of Vocal Repertoire at the Simón Bolívar Conservatory and has also given classes and performance workshops in several schools in Venezuela.

In 1994 she travelled to Buenos Aires as Musical Director of the Avenida Theatre. She worked there staging operas, operettas, zarzuelas, and musicals continuing, at the same time, with her pedagogical work.

She has likewise collaborated artistically counseling the Buenos Aires Opera House, an institution dedicated to the promotion of young singers, where she has participated in the preparation and direction of several events (operas, concerts, etc.).

In view of her interest in the education of young upcoming artists, she was invited by the Beracasa Foundation to the festival that Radio France organizes and sponsors in Montpellier. As a supplementary activity, she has given several conferences and courses for prestigious institutions in Caracas and Buenos Aires.

As a professor of the School, she has participated in several concerts in Madrid at the Lázaro Galdiano and Caja Madrid Foundations, at the Zurbano and Marqués de Salamanca Palaces, Royal Theatre, Madrid’s National Auditorium, Fine Arts Academy, Prado Museum, as well as in several auditoriums of La Coruña, Santander, Tenerife, León, Vitoria, Córdoba, and at the Spanish Embassies of The Hague (Netherlands) and Washington (United States). She has also recorded several albums, some for RNE’s Radio Clásica.