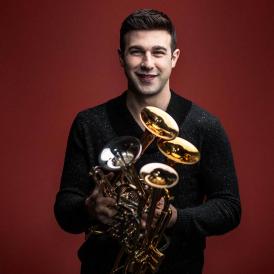 He has won several competitions such as the Ciudad de Xátiva, Villena, Calviá, Moixent, Jeju (South Korea)… Since 2006 he has been the main trumpet of the spanish National Orchestra. His great international achievement came after winning the 1st prize at the prestigious ARD Music Competition in Munich 2011, earning the highest rating in the competition’s history. This award has only been awarded to two other trumpeters in 62 editions before Manuel Blanco, Maurice André being the first to win it in 1963. Blanco is considered his rightful heir.

In 2016, he started one his most passionate projects within his educational vocation, the “MBTrumpetAcademy” school, a meeting point for the most talented trumpet players.

In 2017 he released his first CD, Fearless, recorded for DECCA with the Spanish National Orchestra conducted by Jose Pons. Received with great acclaim by critics and the audience, this recording is a demonstration of the wide-ranging repertoire Blanco is able to address, including works from the entire history of music, from Haydn to Tomasi.

He teaches at the Reina Sofía School of Music and at the Universidad Alfonso X el Sabio.