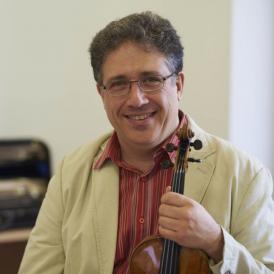 A prize-winner at three of the most prestigious international violin competitions - the Tchaikovsky Competition in Moscow, Queen Elizabeth in Brussels and the Indianapolis - Marco Rizzi is today particularly appreciated thanks to his profound and strong interpreting.

Dedicatee of various contemporary works composed by A. Corghi, L. Francesconi, F. Vacchi, C. Galante and U. Leyendecker, he recorded for Deutsche Grammophon, Amadeus, Nuova Era, Dynamic, Warehouse, etc. The AMADEUS magazine has recently featured him on its front cover due to his last Mozart’s recording.

Marco Rizzi teaches at the Hochschule für Musik in Mannheim and is also professor at the Escuela Superior de Musica Reina Sofia in Madrid. He is also regularly serving as juror in some of the most prestigious violin competitions, such as the Queen Elisabeth Competition (Bruxelles), the Joachim Violin Competition (Hannover) or the Paganini Violin Competition (Genova).