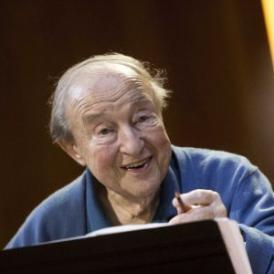 Born in Magdeburg, Germany in 1923, he began his musical studies in Israel, and his international career was launched after receiving the first prize at the Debussy International Piano Competition in San Francisco in 1946.

He has had several Grammy nominations and has received many awards, such as the Bundesverdienstkreuz, France’s Commandeur in the Order of Arts and Letters Award, Gold Medal of Merit from the National Society of Arts and Letters, IX Yehudi Menuhin Prize for the Integration of the Arts and Education by Her Majesty Queen Sofía of Spain, and ATMN Achievement Award.

His tours of North America and Europe have included performances with the orchestras of New York, Chicago, Cleveland, San Francisco, London, Paris, Brussels, Oslo, and Helsinki. In addition, he has offered several recitals in many world-known stages, such as Carnegie Hall in New York, Jordan Hall in Boston, and the Ravinia Festival.

He has also participated in many concerts with chamber ensembles, such as the Juilliard, Emerson, Israel, Tokyo, Guarneri and Cleveland ensembles and the Pasquier Trio. He is founding member and pianist of the Beaux Arts Trio, established in 1995, with which he made his debut as chamber musician at the Berkshire Music Festival. Besides his more than 50 recordings with the Beaux Arts Trio, he has done more than 30 recordings as soloist.

Honorary Ph.D. from the University of Nebraska and the North Carolina School of the Arts, he currently is Assistant of the Piano Ensembles Department of the International Institute of Chamber Music of Madrid, where he frequently teaches master classes. He also has an active pedagogical career as music teacher at Indiana University’s Jacobs School of Music in Bloomington.