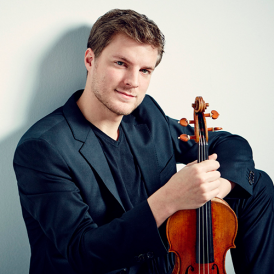 International critics have stated that, “Miguel Colom plays with great distinction”, and have stressed his “narrative strength, vitality and passion”, along with the great respect for how he performs works, his elegant performances and his communication skills with the audience make Colom an exceptional violinist.
The success of Miguel Colom in many international competitions bear out his artistic quality, such as the First Prize at the Ibolyka-Gyarfas Violin Competition (Germany), making Colom the only Spaniard to have won it, or the prize received at the Max Rostal International Competition (Germany). Other awards include the First Prize at the Permanent Competition of Musical Youths of Spain, the Fermo State Conservatory award at the Andrea Postacchini International Competition in Italy, and the First Prize, Special Award and Award for the best performer of Spanish music in the Villa de Llanes International Violin Competition.
As soloist, Colom has played with the RTVE Symphony Orchestra, the World Orchestra, the Freixenet Symphony Orchestra, the Vallés Symphony Orchestra, the Andrés Segovia Chamber Orchestra, the Youth Orchestra of Menorca and the Humboldt Universität Orchestra, among others, in prestigious venues such as Berlin’s Philharmonie and Konzerthaus, Madrid’s National Auditorium of Music, Teatro Monumental and Juan March Foundation, Barcelona’s Auditorium and the Palau de la Música Catalana, Valencia’s Palau de les Arts and Santiago de Compostela’s Auditorium.
In parallel to his career as soloist, Miguel Colom is an active performer of chamber music, in which he has been trained by Eberhard Feltz, the Quiroga Quartet, the Casals Quartet, the Artemis Quartet, Ferenc Rados, and Rainer Schmidt, among others. He is currently a member of the VibrArt Trio, along with pianist Juan Pérez Floristán and cellist Fernando Arias.
Miguel Colom has recorded for the Spanish TV (TVE), the National Radio of Spain and Radio Catalunya, as well as a CD that includes works from several concerts he gave as artist-in-residence at the l'Ateneu Auditorium in Banyoles.
Born in Madrid in 1988, he began to study violin with Sergio Castro and Anna Baget, then furthered his training at some of Europe’s most prestigious institutions such as the Reina Sofía School of Music, under the guidance of Rainer Schmidt, the Hanns Eisler School of Music in Berlin with Antje Weithaaas and the Berlin University of the Arts (UDK) with Nora Chastain. He has also attended masterclasses by Eberhard Feltz, Ferenc Rados, Ana Chumachenco, Claudio Martínez Mehner, and Mauricio Fuks.
The excellence in his training was backed by prestigious scholarships, such as the Obra Social La Caixa Postgraduate Scholarship, a high specialisation scholarship from AIE (Sociedad de Artistas Intérpretes o Ejecutantes)) and a scholarship from Madrid’s Musical Youth.
Miguel Colom plays a 2012 S. P. Greiner violin, generously granted by a sponsor.
Since the 2021-2022 academic year, he is deputy professor at the Reina Sofía School of Music’s the Telefónica violin chair, together with Head Professor Christoph Poppen.