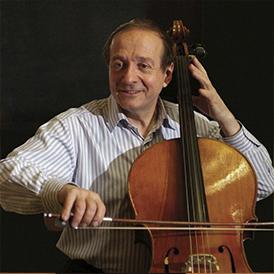 Miklós Perényi was born in Budapest in a musical family in 1948.
For his gift, at a very early age he was admitted into the Liszt Ferenc Accademy of Music. At first he studied with Miklós Zsámboki, afterwards with Ede Banda and Enrico Mainardi. Later on the invitation of Pablo Casals he pursued further studies in the late sixties. Since his early youth he has given concerts throughout Europe and in numerous other musical centers of the world. At present he is Professor Emeritus at the Liszt Ferenc University of Music. Among his awards are the Kossuth and Bartók-Pásztory Prices and the title of the Artist of the Nation. He was also given the French award of the “Chevalier de l'ordre des Arts et des Lettres”. Besides performing and teaching he also composes.