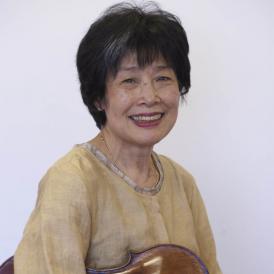 Nobuko Imai is considered one of the most outstanding violists of our time. After finishing her studies at the Toho School of Music, Yale University and the Juilliard School, she won the highest prizes at both the prestigious international competition in Munich and Geneva.
She has appeared with numerous worldwide prestigious orchestras, including the Berlin Philharmonic, the Royal Concertgebouw, the London Symphony, and the Chicago Symphony.
She returns to Japan several times a year, to perform as soloist and notably for the annual “Viola Space” project. In 1995/1996, she was artistic director of three Hindemith Festivals at Wigmore Hall (London), Columbia University (New York), and Casals Hall (Tokyo).
In 2009, she founded The Tokyo International Viola Competition, the first international competition in Japan exclusively for viola. An impressive discography of over 40 CDs includes her recordings for BIS, Chandos, Hyperion, Philips, and Sony, among others.
As a keen chamber musician, she has performed with various prominent artists such as Gidon Kremer, Mischa Maisky, and Martha Argerich. A former member of the renowned Vermeer Quartet and Michelangelo Quartet –which she formed in 2003&#8722;, she combines a distinguished international solo career with various teaching commitments.
She has been Professor at the Detmold Academy of Music from 1983 to 2003, and she currently teaches at the conservatories of Amsterdam and Geneva, Kronberg International Academy, and Ueno Gakuen University in Tokyo. Since the 2015-2016 academic year, she is Professor of the Fundación BBVA Viola Chair at the Reina Sofía School in Madrid.