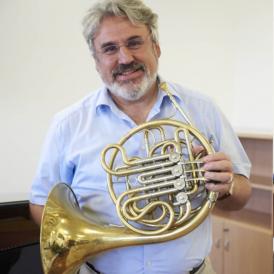 He was born in Zagreb, Croatia, were he began his music studies. He later entered the Academy of Music of Detmold in Germany, where he graduated as soloist.

He won the First Prizes in the Ancona (1979, Italy) and ARD in Munich (1983, Germany) international competitions, which have led him to numerous music festivals in the United States, Asia, Australia and Europe, such as the Santander Encounter of Music and Academia.

Between 1982 and 1990, he was first horn player of the Berlin Radio Orchestra. As soloist he has performed with orchestras such as the Berlin and the Bavarian Radios, the BBC in London, the English Chamber, the Academy of St. Martin if the Fields, the Camerata Academica of the Mozarteum in Salzburg, the Yomiuri Orchestra, and the Tokyo and the NHK Orchestras. As chamber music performer he has played with Vladimir Ashkenazy, Heinz Holliger, Gidon Kremer, Aurèle Nicolet and András Schiff, among others.

Besides his artistic career, he has developed an important role in academia. From 1992 to 1998, he was the professor of horn in the Stuttgart Musikhochschule, and since then he has taught at the Mozarteum in Salzburg. Since the 2000-2001 academic year, he has been Head Professor of the Fundación ”la Caixa” Horn Department of the Reina Sofía Music School. He is also currently Professor of the Wind Department of the International Institute of Chamber Music of Madrid.