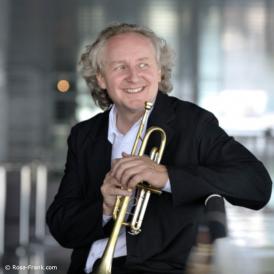 Since his second prize in the international ARD competition in Munich in 1986 Reinhold Friedrich has been present on all important stages of the national and international music scene. His spectrum goes from the latest solo compositions to ancient music and its historical original instruments, such as the baroque trumpet and the keyed trumpet. In 1982 he debuted at the Berliner Festwochen performing Luciano Berio’s “Sequenza X” and 1994 at the Musikverein in Vienna playing Joseph Haydn’s Concerto on the keyed trumpet. Since its founding in 2003, Reinhold Friedrich is a permanent principal trumpet of the Lucerne Festival Orchestra and artistic director of the Lucerne Festival Orchestra Brass Ensemble.
Reinhold Friedrich has played with Capriccio Basel, the Orchestre des Champs-Élysées or the Vienna Academy on historical original instruments as well as premiered works of composers like Wolfgang Rihm, Sir Peter Maxwell Davies, Rebecca Saunders, Hans Werner Henze, Nicolaus A. Huber, and Adriana Hölszky. The concertos “Eirene” by Herbert Willi and “Nobody knows de trouble I see” by Bernd Alois Zimmermann (recording awarded ECHO Classic) form important parts of his wide-ranging repertoire.
As a solo player, he performed with ensembles such as the Berliner Barock Solisten, La Stagione Frankfurt, Wiener and Basler Kammerorchester, Bamberger and Wiener Symphoniker, Orchestre Philharmonique de la Radio France, Deutsches Symphonie Orchester Berlin, Royal Concertgebouw Orchestra, BBC Symphony Orchestra and all orchestras of the ARD. These performances were conducted by, among others, Claudio Abbado, Semyon Bychkov, Dennis Russell Davies, Peter Eötvös, Reinhard Goebel, Martin Haselböck, Philippe Herreweghe, Christopher Hogwood, Eliahu Inbal, Krystjan and Neeme Järvi, Dmitri Kitajenko, Sir Neville Marriner, Ingo Metzmacher, Jonathan Nott, Kazushi Ono and Hans Zender.
His recent partners in the field of chamber music are Eriko Takezwa (piano), Robyn Schulkowsky (percussion), Martin Lücker and Sebastian Küchler-Blessing (organ). Since its foundation in 2013, he performs in the ensemble “L’éventail de Jeanne” together with Claudio Bohórquez (violoncello), Sascha Armbruster (saxophone) and Eriko Takezawa (piano).
In the past seasons Reinhold Friedrich performed in Japan, Mexico, Israel, Norway, Sweden, Finland, Spain, Portugal, Italy, Poland and Switzerland with ensembles such as the Festival Strings Lucerne, Berliner Barock Solisten, Jenaer Philharmonie and Neue Philharmonie Westfalen.
His last engagements include performances with the Philharmonie Baden-Baden, whose artist in residence he was, and Bach’s Brandenburg Concerto no. 2 with Cappella Andrea Barca under the baton of Sir András Schiff. In May 2017 he premiered the trumpet concerto written for him by Benjamin Yusupov. Asked by the Royal Academy of Music and the Juilliard School New York he will be the expert artistic supervisor of a concert and CD production around Giovanni Gabrieli. The recording will be released in the beginning of 2018.
His next engagements include a tour with the Mendelssohn Kammerorchester Leipzig (together with Dorothee Mields), as well as performances with Philharmonisches Orchester Erfurt, Orquestra Simfònica del Vallès, Israel Camerata and Taiwan National Symphony Orchestra. Together with the Stavanger Symphony Orchestra he will premier HK Gruber’s trumpet concerto “Aerial“.
Numerous recordings give evidence of his comprehensive work, among them “Russian Trumpet Concertos” with the Göttinger Symphony Orchestra under the baton of Christoph Mathias Mueller (ECHO Klassik), as well as a recording with the Royal Concertgebouw Orchestra Amsterdam directed by George Benjamin, the world premier recording of Christian Jost’s trumpet concerto “Pieta“ (Coviello) and Bach’s 2nd Brandenburg Concerto with the Berliner Barock Solisten under the baton of Reinhard Goebel (Sony), which has just been released and highly acclaimed by the press.
Reinhold Friedrich is professor in Karlsruhe, honorary professor at the Royal Academy of Music in London and in Hiroshima (Japan). Master classes are regularely held by Reinhold Friedrich all over the world. His former students can today be found as professors at the Universities of Hannover, Freiburg, Essen, Detmold and Budapest as well as in renowned orchestras in Berlin, Munich, Paris, Madrid, Brussels, Leipzig, Hamburg, Stuttgart, Moscow, Tokyo and Rio de Janeiro. He is currently professor at the Reina Sofía School of Music in the IF International Foundation Trumpet Chair.