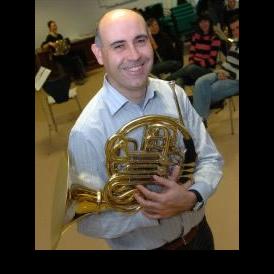 He was born in Eibar (Guipúzcoa) in 1964. He studied horn in San Sebastián and Madrid with Juan Manuel Gómez de Edeta and Miguel Ángel Colmenero, respectively, and won the first prize for complete his career. Also in Madrid he studied Telecommunications Engineering. In 1983 he joined to the National Youth Orchestra of Spain attending workshops with great professors as Ab Koster, Jean Gaudreault, Philip Farkas and Daniel Bourgue.

Later, by a Diputación Provincial of Guipúzcoa’s scholarship he moved to Hamburg, where he did advanced studies with Ab Koster at the Hochschule für Musik und darstellende Kunst. Also completed his training at the National Conservatory of Région of Versailles with Daniel Bourgue, where he received the Gold Medal with congratulations on the complete career contest.

In Hamburg, he collaborates, among other orchestras, with the Sinfonieorchester der Hochschule für Musik, Hamburger Mozart-Orchester, Harvestedehude Orchester, Pro Música Chamber Orchestra and the Hamburg State Opera. He also collaborates with the prestigious German Brass, a metals group. In France has also participated in a concert tour with the Ensemble of Cors of Versailles.

In 1987 he started his professional activity in Spain with the Chamber Orchestra of the Community of Madrid. In 1989 he joined to the Orchestra City of Barcelona, where he remained until 1993. At the same time, he participated in several seasons of concerts of the Chamber Orchestra of the Lliure Theatre, which performs regularly with recording and touring national and internationally. He also plays occasionally with orchestras of the Gran Teatro del Liceo, Galicia Symphony, Royal Philharmonic Orchestra of Galicia and Sevilla Symphony. Since 1992 is part of the Cadaqués Orchestra, working regularly with conductors such as Gennady Rozhdestvensky and Sir Neville Marriner.

As soloist he has performed with the Orchestra City of Barcelona, Euskadi Orchestra, Orchestra of the Community of Madrid and Spain's National Youth Orchestra under the direction of professors Franz Paul Decker, Christian Arming, Miguel Groba and Edmón Colomer, respectively.