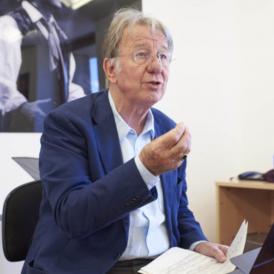 Born in Blaenau Gwent (Wales, United Kingdom) in 1943, he has a great international reputation as a leading operatic tenor due to his long and distinguished career that has afforded him a vast experience in all aspects of concert, lieder and operatic repertoire, in which he continues to play an active role.

In 1969, Sir Georg Solti relied on him for his Covent Garden debut as Hylas in Berlioz’s “The Trojans” conducted by Sir Colin Davis. His first major role was Don Ottavio in Mozart’s “Don Giovanni” in 1970. Since then, his many roles at the Royal Opera House have included Ferrando in Mozart’s “Cosi fan Tutte”, Nemorino in “L'Elisir d’Amore” and Ernesto in “Don Pasquale” by Donizetti, Fenton in Verdi’s “Falstaff”, Lysander in Britten’s “A Midsummer Night’s Dream”, Aeneas in Massanet’s “Esclarmonde”, and Almaviva in Rossini’s “Il Barbiere di Siviglia”. In virtually all these productions, he shared the stage with his countryman Sir Geraint Evans at the Royal Opera House.

Since the early seventies, he has made many appearances on the stages and tours in France, Switzerland, Italy, Germany, Austria, Belgium, Spain, Argentina and Israel, among others. At the same time, he has appeared in concert with all major orchestras, such as the BBC Symphony, London, Cleveland, St Louis and Boston Symphonies, the English Chamber Orchestra, the Vienna and London Philharmonics, Bavarian Radio Orchestra, RAI Radio Orchestra of Milan, and the Santa Cecilia Orchestra of Rome.

Besides a brilliant artistic career, he also has an intense teaching experience of over twenty years. He is currently professor at London’s Royal Academy of Music, he gives classes at his private studio in Claygate (Surrey), and since 2014, he is also Professor of the “Alfredo Kraus” Fundación Ramón Areces Voice Chair at the Reina Sofía School of Music, where he had previously offered masterclasses.