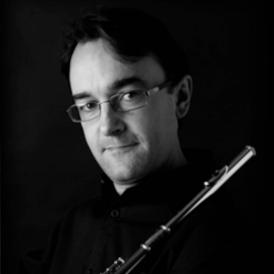 He was born in Manises (Spain) in 1968. He studied at the Conservatory of Valencia, where he graduated with Honors. He later received advice from professors such as Alain Marion, Raymond Guiot and Barthold Kuijken. He furthered his flute studies at the Rotterdam Conservatorium in The Netherlands with Jacquez Zoon, where he got the UM Diploma (soloist diploma) with honors. He has also been awarded several firt prizes in numerous competitions, such as the Bach Society in Madrid and the Juventudes Musicales National Competition.

He is a founder member of the Elegy Trio and collaborates with different Spanish chamber ensembles, such as Grupo Manon, Cambra XX and Taima Granada. Since 1988, he has been part of the Philharmonic of Gran Canaria, Barcelona and Balear Islands’ Symphonies, Orchestra Ciudad de Granada, National Orchestra of Catalonia and Orchestra of Valencia, under the baton of conductors such as Zubin Metha, Kurt Sanderling, Gunter Herbig, Pinchas Steinberg, Eliahu Inbal and Vladimir Fedosseyev, among others.

As a soloist, he has been led by Martin Haselbock, Oleg Gaetani, Josep Pons, Lawrence Foster, Walter Weller, Heinz Wallberg and Yaron Traub, with orchestras such as the Camerata Sa Nostra, Orchestra Pablo Sarasate of Pamplona, and Symphony of Barcelona.

As a teacher, he develops a broad pedagogical work giving lectures throughout Spain, as well as at the youth orchestras of Basque Country, Valencia, Catalonia, Murcia, and the Spanish National Youth Orchestra. He has taught at the Music School of Catalonia (ESMUC) and at the University of Oviedo. He currently is flute soloist of the Orchestra of Valencia and Assistant Professor of the Flute Chair at the Reina Sofía School of Music in Madrid.