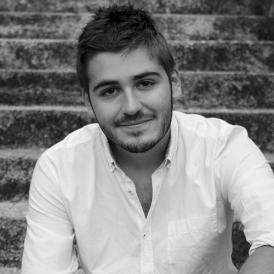 Samuel Tirado pursued the professional degree at the Campo de Criptana Conservatory in Ciudad Real under the guidance of Javier Estevaran, while completing his training with Haruko Tamaki. After this, he entered the Conservatory of Salamanca where he graduated with Honours, as well as with an End-of-Degree Award under the guidance of Patrín Garcia Barredo. In 2017 he moved to The Hague (Netherlands) to complete his training with Naum Grubert, where he finished his studies with outstanding qualifications. He has been advised by Claudio Martinez Mehner, Ferenc Rados, Miguel Angel Ortega Chavaldas, Miriam Gomez Moran, Alberto Rosado, Edith Fischer, Kennedy Moretti, and Galina Eguiazarova, among others.
He has performed concerts as soloist and in different orchestral ensembles in several Spanish venues including Madrid’s National Auditorium, Valencia’s Palau de la Música, Cuenca’s Auditorium, and in Ávila, Santander, Cáceres and Salamanca, as well as in other countries such as Netherlands, United States, France, Czech Republic, and Austria.
He is part of the clarinet and piano duo “Korax” along with his brother Pablo Tirado, performing regularly since 2018. He currently combines his concert activity with his work as a piano professor at the Alcalá de Henares Professional Conservatory in Madrid. Since 2021 he is accompanying piano professor in the Clarinet Chair at the Reina Sofia School of Music.