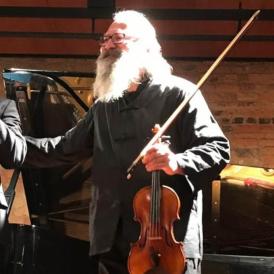 He was born in Novosibirsk (Siberia). He began studying with Galina Turchaninova, with which generations of musicians have formed, some of them of international scale.

He achieved in 1977 the Diploma in Violin Competition of Russia in Kazan, and in 1979 the First Prize in the Wieniawsky Young Violinists in Lublin (Poland).

In 1980 he moved to Kiev (Ukraine) and continues his studies with Professor Olga Parkhomenko, former student of David Oistrakh. Between 1982 and 1986 completed his studies at the State Institute of Gnesin in Moscow with Valentín Berlinski, founder and current member of the Borodin String Quartet, and with Vladimir Spivakov, who founded the chamber orchestra, ''the Moscow Virtuosi''.

In 1986 he began his career as a member of the ''Moscow Virtuosi''. The same year he won the First Prize at the International Competition of Music d'Art Academie of Tours, France.

In 1990 he moved to Spain, with the ''Moscow Virtuosi Orchestra'' at the invitation of the Principado of Asturias. From 1994 to 2002 he was concertmaster of the Symphony Orchestra of Seville. In 1998 he created the Chamber Orchestra of the Royal Seville Symphony Orchestra, which offers, as artistic director and soloist, a wide repertoire from the seventeenth century to the music of today.

He was also concertmaster of the National Orchestra of Spain from 2002 to 2011.