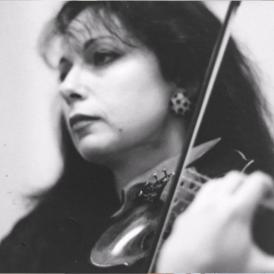 Born in Romania, she studied at the Conservatory of Bucharest. When she was sixteen years old, she made her international debut in The Hague under the baton of Bruno Maderna. In 1969 she won the Marguerite Long-Jacques Thibaud Competition in Paris, as well as the Special Prize of the Prince Ranier of Monaco. In 1970 she was awarded First Prize at the George Enescu Competition in Bucharest.

In 1972 she was invited by Leopold Stokowsky to play Glazunov’s Concerto for Violin with the London Symphony Orchestra at the Royal Albert Hall. Her discography includes Debussy, Franck and Fauré sonatas for Aurophon-Classics and the Sibelius Violin Concerto under the baton of Neeme Järvi with the Göteborg Symphony Orchestra for BIS. She frequently performs concert tours in North and South America, Japan, Israel and throughout Europe. She is a refined and fascinating violinist and has to her credit a rich activity in chamber music.

She frequently appears in recitals with renowned pianists and she has recently performed concerts with her son Aimo Pagin. She is currently a professor at the Faculty of Music of the Graz University (Austria).