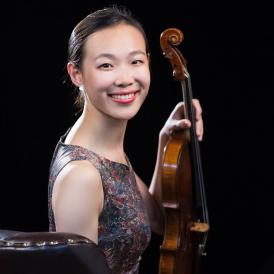 The Chinese violist Wenting Kang appeared as an “excellent violist” who “possesses a dark glowing sound” in New York Times after her performance in the Marlboro Music Festival tour performance at Carnegie Hall. Kang’s playing also has been described as “elegant, precise and not without expressive intensity” as well as “pure, muscular tone-passionate without ever losing a sense of control” in Boston Musical Intelligencer.

As a soloist, Kang performed with Tokyo Metropolitan Orchestra and Tokyo TOHO Gakuen Orchestra, and Boston Modern Orchestra Project. She has given solo performances in prestigious concert venues such as Jordan Hall in Boston, Kioi Hall and Ishibashi Memorial Hall in Tokyo.

Currently studying at Kronberg Academy as a young soloist for her Master Degree working with Nobuko Imai, she also has a position in the Israel Philharmonic Orchestra. She achieved her Master of Music Degree and Graduate Diploma with Kim Kashkashian and Garth Knox at the New England Conservatory, where she has worked as exchange student with renowned violinists Donald Weilerstein and Miriam Fried. She is also Assistant Professor in the Fundación BBVA Viola Chair of Nobuko Imai at the Reina Sofía School of Music.