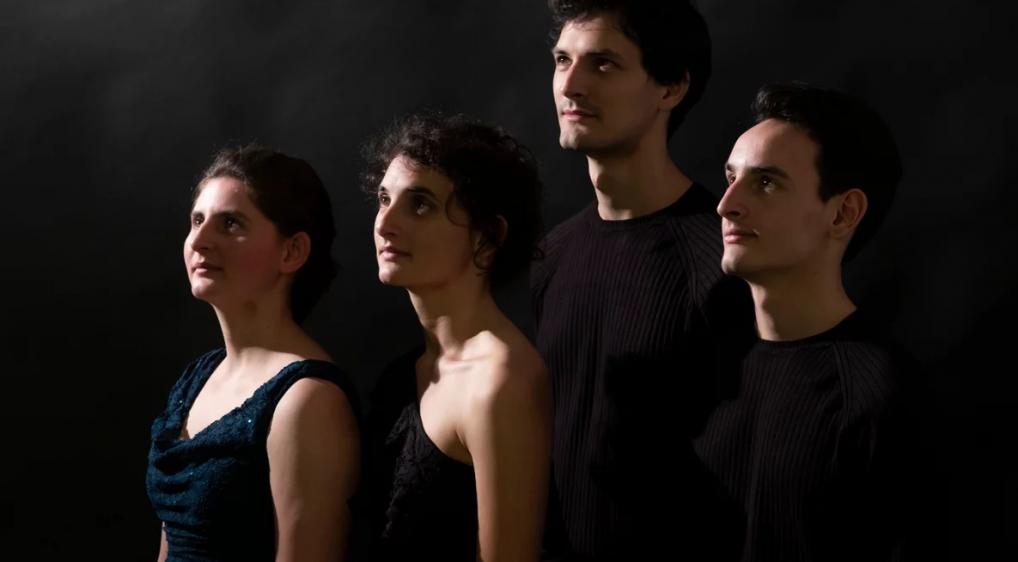 The Tchalik Quartet was founded in 2013 and is formed by siblings Gabriel y Louise (violins), Sarah (viola), and Marc Tchalik (cello).

The Tchalik Quartet has the peculiarity of being composed of four brothers and sisters. Born into a family with Russian origins and where music holds a central place, they have played together from a very early age. This immersion in chamber music has enabled them to develop a closeness and natural harmony and sensitivity which are apparent in their music.

In February 2018, the Tchalik Quartet brilliantly came away with 1st Prize and a Special Prize for the best interpretation of a Mozart quartet at the International Mozart Competition 2018 in Salzburg.

The Quartet has studied with such internationally renowned musicians as Jan Talich and Vladimír Bukac (Talich Quartet), Yovan Markovitch (Quatuor Danel), Luc-Marie Aguerra (Quatuor Ysaye), and Johannes Meissl (Artis Quartett). In 2016, they were admitted into the class of Günter Pichler (first violin and founder of the legendary Alban Berg Quartet) at the Escuela Superior de Mùsica Reina Sofia in Madrid, and since 2019 they are studying with Krzysztof Chorzelski (Belcea Quartet). Thanks to these prestigious musicians who represent the different European musical traditions at their highest level, the Tchalik Quartet has developed a fine repertoire of classical and romantic music.

They are also keen players of the contemporary repertoire. They have premiered works by composers like Jacques Boisgallais, Michèle Reverdy, Bastien David, and they are releasing in 2019 their first album Short Stories dedicated to Thierry Escaich's chamber music works, with whom they have been working for a while. This album has just been awarded the Choc de Classica. In 2020 they performed at the Philharmonie de Paris the world premiere of Quale stormo d’augei notturno by Pierre Farago.

The Quartet has played at prestigious festivals in France, including those of Radio France Occitanie Montpellier, Flâneries Musicales de Reims, Orangerie de Sceaux, Périgord Noir, Musicales du Golfe, Festival des Forêts, Festival de violoncelle de Beauvais, and the Festival du Comminges. They also played at the Musée de l'Orangerie in Paris, at the Musée des Beaux-Arts in Rouen, at the Musee d'Art et d'Histoire du Judaisme in Paris, and in 2021 they will be on stage at the Auditorium du Louvre and at the Théâtre des Champs-Elysées.

Internationally they have been invited to the Mozartfest Würzburg, the Rheingau Festival in Germany, to the Midis Minimes in Brussels, to the Bodensee Festival in Switzerland, to the Palazzetto Bru Zane in Venice, to the Haydn Festival at the Esterhazy Castle in Hungary, to the Mendelssohn House in Leipzig and to the Mozarteum in Salzburg. In December 2019, they had their first tour in China.

They have also been regularly invited on radios such as France Musique, Radio Classique, Musiq’3 (RTBF), SWR2, Espace 2 (RTS), BBC 3…

The young musicians also received the Award of the Fondazione Monte dei Paschi 2017 in Siena. They are laureate of the Tremplin de la Philharmonie de Paris, and are supported by the Safran Foundation. By the end of 2017, the Quartet had become designated residents of ProQuartet and was selected by Simone Gramaglia (Quartetto di Cremona) to take part in the Le Dimore del Quartetto project in Italy. In 2019 the Tchalik Quartet became laureate of the academy of the Heidelberger Frühling.

In November 2020, the second recording of the Tchalik siblings, with this time the chamber music by Reynaldo Hahn has been released. Their third CD, with Saint-Saëns’ quartets will be released in fall 2021.

The instruments played by the members of the Quartet are exclusively made for them by violin maker Philippe Mitéran and bow-maker Konstantin Cheptitski.

The Tchaliks regularly play as a quintet with their pianist brother, Dania Tchalik.

Since 2016, the Tchalik Quartet furthers its chamber music training with Professor Günter Pichler in the International Institute of Chamber Music of Madrid at the Reina Sofía School of Music thanks to the sponsorship of the Albéniz and Safran Foundations.