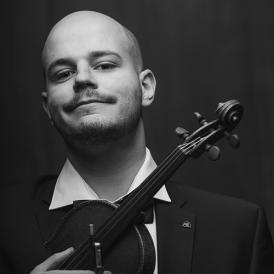 Born in Torrejón de Ardoz, Spain, in 1997. Since 2021, he studies at the Reina Sofía School of Music’s Telefónica Violin Chair with professor Christoph Poppen. He has been granted a scholarship by Fundación Albéniz. He plays a Nicolás Lupot violin, loaned as an instrument scholarship by Arcos González.

He graduated from the Amaniel Music Conservatory, where he was awarded the End-of-degree award, under the guidance of Alfredo García Serrano, with whom he studied the degree in Musical Performance at the Faculty of Music and Performing Arts at the Alfonso X el Sabio University, obtaining the highest qualifications and being the most outstanding student of his class. He then studied, in the same faculty, a Master’s Degree in Musical Performance and Performative Investigation with professor Miguel Colom.
He has attended masterclasses by Jesús Reina, Noah Bendix Balgley, Grigory Kalinovski, Friederieke Saeijs, Raquel Castro, Yuval Gotlibovich, Oliver Wilde, Sergey Teslya, Olga Virkormiskaia, Amayak Dourgarian, Mariana Todorova, Linus Roth, and Cibrán Sierra (string ensembles).

He was awarded the second prize at the 7th City of Vigo Violin Competition in 2018 in the superior category.

He is a founding member of the Opus 22 Ensemble, which has participated in the last edition of Sueca’s Mostra Sonora and collaborates extensively with the association Mujeres en la Música, performing concerts at Sueca’s Fuster Hall, Madrid’s Real Academia de Bellas Artes San Fernando, the Basilios Auditorium of the Music Hall at the University of Alcalá de Henares and the Yehudi Menuhin Auditorium of the Alfonso X el Sabio University. He has also been awarded the first prize and the special prize for the best performance of Spanish music at the 12th Villa de Cox Chamber Music National Competition and the second prize at the 10th Chamber Music Competition of Alzira.

As a student of the School, he has been part of the Sinfonietta under the batton of Johannes Kalitzke. In 2021 he participated in the 30th anniversary tour of the School with the Freixenet Symphony Orchestra, conducted by Andrés Orozco-Estrada, with whom he performed at Madrid's Teatro Real, at Bratislava's Reduta Hall, at Budapest's Liszt Ferenc Academy and at Vienna's Musikverein. He is also a member of the BP Mendelssohn Quartet.