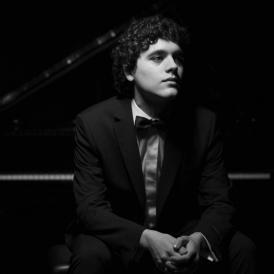 Born in Alcalá de Henares, Spain, in 2001. Since 2019, he studies at the Reina Sofía School of Music’s Fundación Banco Santander Piano Chair with professor Galina Eguiazarova, having received the Diploma to the most outstanding student of his chair in 2021. He has been granted scholarships by AIE-Sociedad de Artistas, Intérpretes y Ejecutantes and Fundación Albéniz.

He started studying piano at the age of four under the guidance of Inmaculada García Soria and later continued with Tamara Harutyunyan. He finished the professional degree with the highest qualifications and received the extraordinary prize of Castilla La Mancha. He has subsequently received masterclasses from Ralf Gothóni, Stanislav Ioudenitch, and Matthew Wilkie among others, and, during the Santander Encounter of Music and Academy, from Claudio Martínez Mehner, Galina Eguiazarova, and Joan Enric Lluna.

He has been awarded first prize in national and international competitions. He has attended classes by Ana Guijarro and Elena Orobio, as well as by Grigory Gruzman, Stanislav Pochekin, and Jacques Rouvier.

As a student of the School, he has been part of the Sinfonietta under the baton of Johannes Kalitzke, and he has performed within the World Heritage Cities in Cuenca and Córdoba. He has been a member of the Prosegur Albéniz Ensemble and is currently part of the Schola and the Poulenc Trios.