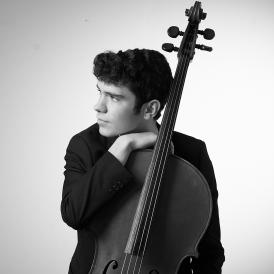 Born in Madrid, Spain, in 2002. Since the 2016-2017 academic year, he has been granted scholarships by Consejería de Educación, Universidades y Ciencia de la Comunidad de Madrid and Fundación Albéniz. He studies at the Reina Sofía School of Music’s Aline Foriel-Destezet Cello Chair with professors Ivan Monighetti y Michal Dmochowsky, and since 2017 with Jens Peter Maintz and Fernando Arias. In 2021 he received the Diploma to the most outstanding student of his chair.

He has attended masterclasses in the US by Benjamin Gish and Steve Doane and, in Spain, by Gary Hoffman, Wolfgang Boettcher, Frans Helmerson, Helena Poggio, Gautier Capuçon, Asier Polo, Christoph Poppen, Linus Roth, Oliver Wille, Alban Gerhardt, and Ralf Gothóni. A significant experience in his musical life has been playing for Natalia Shakhovskaya, from whom he received valuable advice.

He has also performed in recitals in the Philarmonic Hall in Oviedo, the Jovellanos Theatre in Gijón, the Avilés House of Culture, sponsored by the Philarmonic Societies of Asturias, and in the Condestable Palace of Pamplona.

He has received scholarships by Madrid’s Musical Youth and the AIE and has attended several summer festivals such as the Bowdoin International Music Festival in Brunswick (Maine, USA), the Mozarteum Summer Academy in Salzburg, the Pablo Casals Festival in Prades and the Mendelssohn Festival in Hamburg, where he received advice from cellists such as Astrid Schween, Danjulo Ishizaka, Maria Kliegel, Orfeo Mandozzi, Emil Rovner, Torleif Thedeen, and Jerome Pernoo.

As a student of the School, he has been a member of the Freixenet Symphony Orchestra, conducted by Péter Eötvös and Pablo Heras-Casado, and has been soloist with the same orchestra, conducted by Jordi Francés. He has also performed with the Fundación EDP Camerata under the baton of Paul Goodwin. In 2021 he participated in the 30th anniversary tour of the School with the Freixenet Symphony Orchestra, conducted by Andrés Orozco-Estrada, with whom he performed at Madrid's Teatro Real, at Bratislava's Reduta Hall, at Budapest's Liszt Ferenc Academy and at Vienna's Musikverein. He has also been part of the Casa de la Moneda Scarlatti, Cosan, Deloitte Mozart, and Enagás Schumann ensembles. He is currently part of the Banco de España Arriaga Ensemble.

He plays a SIELAM baroque cello bow, loaned as an instrument scholarship by Fundación Albéniz.