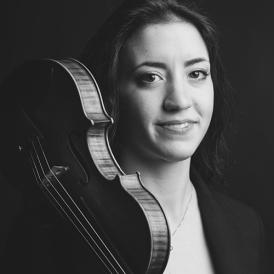 Born in Roma, Italy, in 1999. Since 2021, she studies at the Reina Sofía School of Music’s Telefónica Violin Chair with professor Marco Rizzi. She has been granted scholarships by Reale Foundation and Fundación Albéniz. She plays a SIELAM baroque violin bow, loaned as an instrument scholarship by Fundación Albéniz.

Alice Notarangelo graduated with Honours at the S. Cecilia Conservatory (Rome) in 2017 under the guidance of Giuseppe Crosta. She was also a student of Oleksandr Semchuk at the Accademia Pianistica Internazionale di Imola and attended masterclasses with A. Company, R. Gonzalez Monjas, L. Hagen. In 2021 she pursued the Master in Music Performance at the Conservatorio della Svizzera Italiana in Lugano under the guidance of Marco Rizzi.

From 2015 to 2019 she is a founding member of the Quartetto Elsa, with which since 2016 she attended the courses at the Accademia Walter Stauffer in Cremona. They won several national and international competitions, such as the Premio Crescendo in Florence and the Concorso “Riviera etrusca” in Piombino. From 2018 she is founding member of the Trio Enea, formed within the AVOS Project in Rome, and
in 2020 they were named winners of the “Harmony International Music Academy Contest”. They are currently attending the chamber music course in the Accademia di Musica di Pinerolo.

From 2015 to 2017 she is concertmaster of the “Juniorchestra” of the Accademia Nazionale di Santa Cecilia, with which she had the possibility to work with internationally renowned musicians such as A. Pappano, M. Brunello, F. Biondi, J. Levi, S. Mintz, F. Dego, E. Pahud, S. Careddu, S. Accardo, S. Bollani, G. Sollima. She also collaborated as concertmaster with the OGI (Youth Orchestra of Italy), Orchestra Sinfonica Abruzzese and the Orchestra Filarmonica di Benevento, with which in 2019 she premiered as a soloist “Enchantmant!”, composed by C. Ciampa. Since 2019 she is member of the European Union Youth Orchestra (EUYO) and in 2021 she won a tutti position in the Santa Cecilia National Academy Orchestra, Rome.

As a student of the School, she has performed with the Fundación EDP Camerata, conducted by Paul Goodwin. In 2021 she participated in the 30th anniversary tour of the School with the Freixenet Symphony Orchestra, conducted by Andrés Orozco-Estrada, with whom she performed at Madrid's Teatro Real, at Bratislava's Reduta Hall, at Budapest's Liszt Ferenc Academy and at Vienna's Musikverein. She is also a member of the Casa de la Moneda Scarlatti Ensemble.