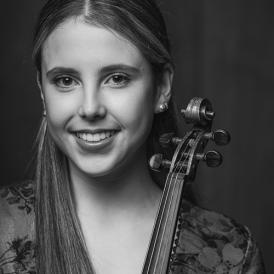 Born in A Coruña, Spain, in 2003. Since 2021, she studies at the Reina Sofía School of Music’s Telefónica Violin Chair with professor Marco Rizzi. She has been granted scholarships by Inditex and Fundación Albéniz.

She started her music and violin studies at the age of 7 and she got the Professional Degree in Music, specialising in violin, with Honours and the End-of-Degree Award at the A Coruña Conservatoire with teacher David Veiga. She has attended classes by Domenika Malec and masterclasses by Raquel Castro, Alena Baeva, Anna Baget, Jesús Reina, Sergey Teslya, Boris Kuschnir, Manuel Guillén, and Linus Roth. Since 2017, she attends classes by Ludwig Dürichen and since 2020 by Miguel Colom.

Among the awards she has won it is worth highlighting the first prize at the Soloist Competition of the A Coruña Music Conservatory (in 2015 and 2018), the Honorary Mention at the 7th City of Vigo International String Competition in 2018, and the Gallega Award in 2020. That same year, she also won the Prodigios TV show of the Spanish TVE, in the instrumental category, accompanied by the Symphony Orchestra of Castilla y León. She has also received the Extraordinary Prize in artistic and professional teachings in the modality of Music, Violin in the Autonomous Community of Galicia (2021) and the Mans Futuro Prize for musical excellence.

She has also performed as soloist in the 2021 RTVE Gala de Reyes with the RTVE Symphony Orchestra.

As a student of the School, in 2021 she participated in the 30th anniversary tour of the School with the Freixenet Symphony Orchestra, conducted by Andrés Orozco-Estrada, with whom she performed at Madrid's Teatro Real, at Bratislava's Reduta Hall, at Budapest's Liszt Ferenc Academy and at Vienna's Musikverein. She has been a member of the Dvořák Quartet and is currently part of the Saint-Saëns and Puertos del Estado Haendel ensembles.