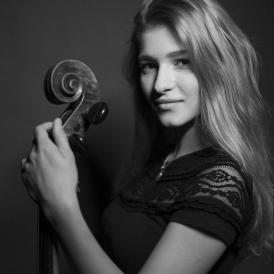 Born in Moscow, Russia, in 1995. Since 2019, she studies at the Reina Sofía School of Music’s Aline Foriel-Destezet Cello Chair with professor Ivan Monighetti. She has been granted a scholarship by Fundación Albéniz.

She started studying cello at the age of six at the A. Lyadov Music School. In 2015 she graduated from the Gnessin State Musical College and later continued her training at Moscow’s Tchaikovsky Conservatory with Natalia Shakhovskaya and Aleksey Seleznev. She has also attended masterclasses by Wolfgang Emanuel Schmidt, Ralf Gothóni, Alban Gerhardt, Cibrán Sierra, Aitor Hevia (string ensembles), and, during the Santander Encounter of Music and Academy, by Miklós Perényi.

As a student of the School, she has been part of the Freixenet Symphony Orchestra, conducted by Pablo González, as well as that of the Sinfonietta with Johannes Kalitzke, and Fundación EDP Camerata under the baton of Paul Goodwin. She has been a member of the Enagás Schumann Quartet and the Ramales and Mistral trios, and she is currently a member of the Stoneshield Quartet.