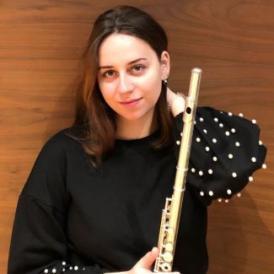 Born in Moscow (Russia) in 1996. In 2005 she was accepted into the Central Music School of the Moscow State P. I. Tchaikovsky Conservatory, completing the studies in 2014. In 2018 she graduated at the Basel Music Academy with professor Felix Renggli and got her master's degree in 2020. Anastasia performs in Switzerland, Russia and other countries. She has played in the Russian Youth Symphony Orchestra, the Chamber Orchestra of the Moscow Conservatory and the Neues Orchester Basel. She was member of the Orchestra of Zakhar Bron’s Festival in Interlaken and participant at the Lucerne Festival Academy, where she performed with the orchestra under the baton of Sir Simon Rattle, Matthias Pintscher and Peter Eötvös. She has participated in workshops of outstanding soloists and pedagogues such as Philippe Bernold, Pierre-Yves Artaud and Mathieu Dufour.