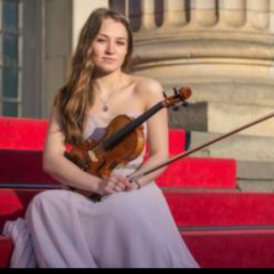 Born in Kiev (Ukraine) in 1995. At the age of 12 she made her first debut performance with an orchestra. Shortly after, she moved to Germany to study with Latica Honda-Rosenberg in Freiburg. She continued her education with Kolja Blacher at HfM Hanns Eisler in Berlin as a junior scholar and completed her bachelor’s degree and later, her master's degree with Prof. Erxleben at the UdK in Berlin. She has been granted a Rotary Club scholarship and has been awarded first prize in the Jugend Musiziert Competition in Germany. Anastasia has attended masterclasses by professor Zakhar Bron and has played in projects and chamber music with renowned artists such as Denis Matsuev, Roland Villazon, Daniel Hope, Ivan Monighetti and Claudio Martinez Mehner. She has also participated in several orchestra projects conducted by Valeriy Gergiev, Michail Jurowski and Krzysztof Penderecki, among others.