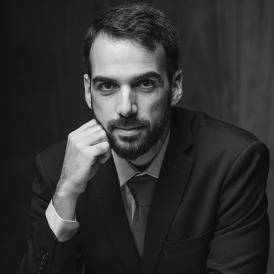 Born in Zurich, Switzerland, in 1987. He is an Italian composer. Since 2020, he studies at the Reina Sofía School of Music’s IF International Foundation Composition Chair with professor Fabián Panisello. He has been granted a scholarship by Fundación Albéniz.

He studied at the Arcangelo Corelli Conservatory in Messina (Italy), where he obtained his clarinet degree in 2007. He also obtained his composition degree, with highest qualifications, at the Giuseppe Verdi Conservatory (Italy), where he studied with Alessandro Solbiati and won the first prize of Premio del Conservatorio in 2019. He was also awarded at the Galleria D’Arte Moderna European Composition Competition.
He has attended masterclasses and workshops by Michael Jarrell, Toshio Hosokawa, Ivan Fedele, José Manuel López López, Francesco Filidei, and Fabien Lévy.

He has been artist-in-residence at the Società Aquilana dei Concerti Bonaventura Barattelli (Italy) during the 2019-2020 academic year, as well as a secondary school teacher between 2015 and 2020. He has collaborated with groups such as MDI Ensemble, Divertimento Ensemble, as well as with Sara Minelli and other musicians. He is the composer and clarinetist of the “Anemos” album for EMA Records. He has also composed music for theatre (works by Euripides, Pirandello, Verga and others).