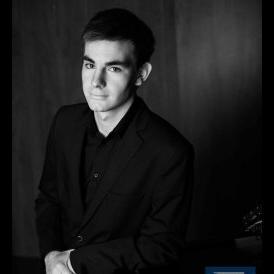 Born in Madrid (Spain) in 1993, he has studied at the Royal Conservatory of Madrid and at the Reina Sofía School of Music with Galina Eguiazarova. He also studied his master’s in performance with Norma Fisher at the Royal College of Music and he is currently studying at the Haute École de Musique de Genève with Nelson Goerner. He has performed at the Wigmore Hall in London, the National Auditorium and Royal Theatre of Madrid and at the Palau de la Música Catalana. He has been awarded with the Review’s Award and the second prize at the “Primer Palau Award”, first prize at the Ecoparque Transmiera International Chamber Music Competition (Cantabria), second prize and prize to the best performance of a Spanish piece at the Antón García International Chamber Music Competition, and he has been finalist at the Parkhouse Award with the Ramales Trio.