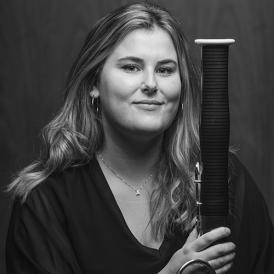 Born in Quart de Poblet, Spain, in 1998. Since 2021, she studies at the Reina Sofía School of Music’s Bassoon Chair with professor Gustavo Núñez. She has been granted a scholarship by Fundación Albéniz.

She graduated from Torrent’s Music Conservatory with an End-of-Degree Award and she entered Madrid’s Royal Conservatory to study under the guidance of Salvador Aragó Muñoz. In the 2019-2020 academic year she studied at Düsseldorf ‘s Robert Schumann Hochschule with Gustavo Núñez within the framework of an Erasmus programme. She has attended courses by professors Gustavo Núñez, Enrique Abargues, Higinio Arrué, Salvador Sanchís, Giorgio Mandolesi, and Matthew Wilkie (bassoon and chamber music).

As a student of the School, she has been part of the Fundación EDP Camerata, conducted by Paul Goodwin, and has performed within the World Heritage Cities series in Segovia and Tarragona. She is a member of the O Globo Quintet and the Mutua Madrileña Ensemble.