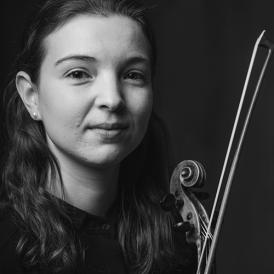 She began her violin studies at the age of 7 with professor Nava Milo. She then studied with legendary Chaim Taub and Hagai Shaham. She earned the distinction of outstanding musician in the Israeli army. She also won a scholarship from the American Israeli Cultural Foundation and was awarded with an outstanding achievement by Maestro Zubin Mehta. She has also a degree in Music from the University of Tel Aviv Buchmann-Mehta School. She was also a violinist of the Musethica Quartet-Israel and graduated from the Perlman Music Programme. She studies the Artist Diploma at the Buchmann-Mehta School. She has attended masterclasses by Itzhak Perlman, Leonidas Kavakos, Silvia Marcovici, Miriam Fried, Linus Roth, Cibrán Sierra, Aitor Hevia (string ensembles).

She is one of the most active and prominent Israeli violinists and has performed in Germany, Switzerland, the Netherlands, Canada, United States, Brazil, Chile and Argentina, among others.

She plays a violin made by Carlo Antonio Testore loaned by businessman Yehuda Zisapel.

As a student of the School, in 2021 she participated in the 30th anniversary tour of the School with the Freixenet Symphony Orchestra, conducted by Andrés Orozco-Estrada, with whom she performed at Madrid's Teatro Real, at Bratislava's Reduta Hall, at Budapest's Liszt Ferenc Academy and at Vienna's Musikverein. She is also a member of the Stoneshield Quartet.