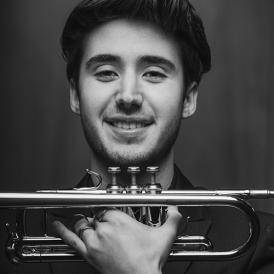 Born in Campillos, Spain, in 2001. Since 2020, he studies at the Reina Sofía School of Music’s IF International Foundation Trumpet Chair with professor Reinhold Friedrich. He has been granted a scholarship by Fundación Albéniz.

He began his music studies at the Rafael Reyes Vergel basic training school in his hometown and later furthered them at Granada’s professional conservatory of music and at the Manuel Carra Conservatory in Málaga, where he obtained the professional degree in music with Honours. In 2019 he took the first year of the higher degree at Barcelona’s Liceo.

He has attended masterclasses by Manuel Blanco, Reinhold Friedrich, Benjamín Moreno, Antonio Portillo, and Håkan Hardenberger (trumpet and wind ensembles), among others.

As a student of the School, he has been part of the Freixenet Symphony Orchestra, conducted by Pablo Heras-Casado, and within Spain's World Heritage Cities Chamber Music Series (Cáceres). He has been a member of the Telemann Ensemble and is currently part of the Saint-Saëns Ensemble.