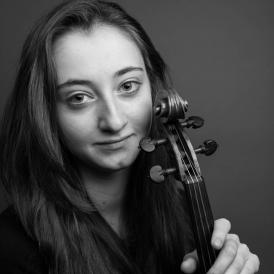 Born in Maikop (Russia) in 1996. Since 2015, she studies at the Reina Sofía School of Music’s Fundación BBVA Viola Chair with professor Nobuko Imai. She has been granted a scholarship by Fundación Albéniz. Her Majesty Queen Sofía handed her the Diploma to the most outstanding student of her chair in the 2016-2017 academic year.

She started playing violin and piano at the age of six. In 2009 she entered the Tchaikovski Conservatory in Moscow, where she studied with Maria Sitkovskaya. She was part of the Conservatory’s Chamber Orchestra, with whom she toured Europe. She has been awarded in several competitions, including first prize at the 18th City of Xátiva Young Performers Competition (Valencia, 2018).

As a student of the School, she has attended masterclasses by Veronika Hagen and the Casals Quartet, Antoine Tamestit, Hariolf Schlichtig, Lawrence Power and Tabea Zimmermann. She has performed with the Freixenet Symphony Orchestra, conducted by Zubin Mehta, Stefan Lano, Juanjo Mena, Plácido Domingo, Pablo González, Jaime Martín, Víctor Pablo Pérez and Andrés Orozco-Estrada, and during the Santander Music and Academy Encounter, under the baton of Krzysztof Penderecki. She has also been part of the Camerata, conducted by Anne-Sophie Mutter and that of the Sinfonietta, under the baton of Baldur Brönnimann and Jorge Rotter. She has been a member of the Fundación Mutua Madrileña String Consort and is currently part of the BP Mendelssohn Quartet.