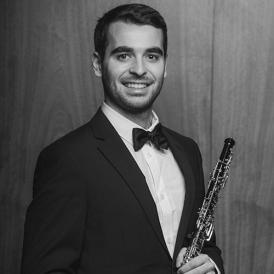 Born in Segorbe, Spain, in 1999. Since 2021, he studies at the Reina Sofía School of Music’s Oboe Chair with professor Hansjörg Schellenberger. He has been granted a scholarship by Fundación Albéniz.

He began his piano studies at the age of 6 but he later changed to oboe. He studied at the Segorbe Musical Society with Daniel Gomez Asensio, at Segorbe’s Alto Palancia Conservatory with Juan Francisco Plasencia Civera, earning the End-of-Degree Extraordinary Award in 2017, and at the Music Conservatory of Castilla-La Mancha with Aitor Llimerá Galduf. He has also attended improvement courses by great professors such as Francisco Salanova, Bartolome Raga, Vicente Llimerá, Washington Barella, Miriam Pastor, Ivan Podyomov, Salvador Barbera, as well as masterclasses by Joan Enric Lluna, among others.

As a student of the School, he has been part of the Fundación EDP Camerata, conducted by Paul Goodwin. He is also a member of the Cosan, Françaix and Fundación Mutua Madrileña ensembles.