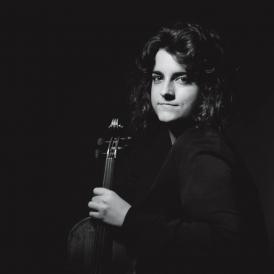 Born in Laredo (Spain) in 1993. Since 2018, she studies at the Reina Sofía School of Music’s Telefónica Violin Chair with professor Marco Rizzi. She has been granted scholarships by Fundación Mª Cristina Masaveu and Fundación Albéniz.

She started her violin studies at the Jesús de Monasterio Conservatory of Santander under the guidance of Paula Bolado, where she obtained the highest qualifications, as at the Conservatory of Aragón where she furthered her training with Rolando Prusak and Pablo Suárez. In 2017 she completed a Master’s Degree in performance at the Conservatory of the Italian Switzerland with professor Massimo Quarta. Meanwhile, she studied chamber music with the Quiroga Quartet and Sasaki, as well as contemporary music with Nacho de Paz and Arturo Tamayo.

As a student of the School, she has attended masterclasses by Miriam Fried, Ingolf Turban, Christoph Poppen and Linus Roth. She has been part of the Freixenet Symphony Orchestra, conducted by Plácido Domingo, Víctor Pablo Pérez, Péter Eötvös, and Andrés Orozco-Estrada. She has also been part of the Puertos del Estado Haendel Trio and the Prosegur Albéniz Quartet and Ensemble. She is currently a member of the Schola Trio.