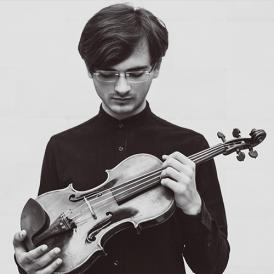 Born in Chisinau, Moldavia, in 1996. Since 2021, he studies at the Reina Sofía School of Music’s Telefónica Violin Chair with professor Zakhar Bron. He has been granted a scholarship by Fundación Albéniz.

After being granted a full scholarship at the Whitgift International Music Competition at the age of 16 he moved to London, where he received private lessons from David Taneko, and in 2020 he graduated as a scholarship student at the Guildhall School of Music & Drama.

He is the winner of the Guildhall Lutine Award and finalist of the Gold Medal in 2018.

He made his debut in London in 2015 at the Royal Festival Hall, performing Glazunov’s violin concert with the Royal Philharmonic and the Whitgift Symphony Orchestra before His Royal Highness Prince Andrew, playing a 1696 Stradivarius violin loaned by Andrew Bernardi, who has continued supporting him ever since.

He has performed with youth orchestras of Moldavia, Romania and United Kingdom, such as Guildhall Symphony Orchestra and Transylvania State Philharmonic Orchestra, among others. He has also attended masterclasses by Chloe Hanslip, Daniel Hope, Corina Belcea, Alexandru Tomescu, Johannes Meissl, Patrick Jüdt, and Hatto Beyerle.

He is one of the founding members of the Chamber Music Moldo Crescendo Festival, based in Moldavia, which led him to become a member of the Moldo Crescendo Trio. After four editions, the festival has performed more than thirty concerts in Moldavia and Romania. He recently joined the Fitzroy Quartet, with whom he has already toured Scotland.

As a student of the School, in 2021 he participated in the 30th anniversary tour of the School with the Freixenet Symphony Orchestra, conducted by Andrés Orozco-Estrada, with whom he performed at Madrid's Teatro Real, at Bratislava's Reduta Hall, at Budapest's Liszt Ferenc Academy and at Vienna's Musikverein. He is currently a member of the Casa de la Moneda Scarlatti Ensemble.