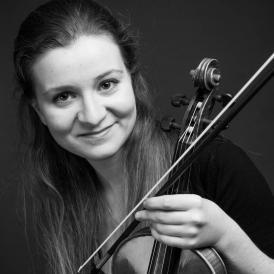 Born in Vidin, Bulgaria, in 1993. From 2016 to 2022 she studied at the Reina Sofía School of Music’s Telefónica Violin Chair with professor Zakhar Bron.

She started her violin studies at the age of five and a year later, she gave her first concert in Bulgaria. In 2002 she entered the Padre Antonio Soler Centre of Integrated Music with Polina Kotliarskaya and in 2011 she started to study at the Madrid Royal Conservatory with Sergey Teslya, where she graduated with Honours in violin in 2015, as well as the Conservatory’s Prize of Honour. She has attended masterclasses by Mincho Minchev, Ilya Kaler, Stephan Picard, Ema Alexeeva, Sergey Fatkulin, Yair Kless, Mauricio Fuks, Natalia Prishepenko, Christoph Poppen, Miriam Fried, Ingolf Turban, Silvia Marcovici, Giovanni Guzzo, Linus Roth, Oliver Wille, the Casals Quartet, Cibrán Sierra and Aitor Hevia (string ensembles) and during the Santander Academy and Music Encounter, by Mihaela Martin. She has been awarded first prize in the youth category at the 13th Violins for Peace International Violin Competition (2015) and special prize in the Excellence category at the 4th Marie Cantagrill International Violin Competition (2016). In 2013 she participated at the Penderecki musikakademie Westfalen international orchestra academy, conducted by Krzysztof Penderecki, and in 2019 she performed with the Gustav Mahler Jugendorchester, conducted by Jonathan Nott.

As a student of the School, she has been part of the Freixenet Symphony Orchestra, conducted by Antoni Ros-Marbà, Plácido Domingo, Pablo González, Pablo Heras-Casado, Jaime Martín, Víctor Pablo Pérez, Andrés Orozco-Estrada, Sir András Schiff and David Afkham, as well as that of the Fundación EDP Camerata, under the baton of Anne-Sophie Mutter. In 2021 she participated in the 30th anniversary tour of the School with the Freixenet Symphony Orchestra, conducted by Andrés Orozco-Estrada, with whom she performed at Madrid's Teatro Real, at Bratislava's Reduta Hall, at Budapest's Liszt Ferenc Academy and at Vienna's Musikverein. She has also been a member of the Puertos del Estado Haendel Quartet and the Brahms, Enagás Schumann, and Prosegur Albéniz ensembles, as well as the Stoneshield Quartet.