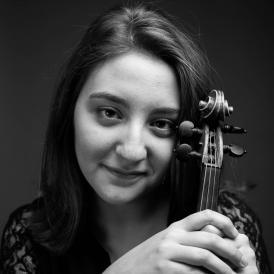 Born in La Coruña, Spain, in 1998. Since 2016, she studies at the Reina Sofía School of Music’s Telefónica Violin Chair with professor Marco Rizzi. She has been granted scholarships by Inditex and Fundación Albéniz.

She started her violin studies at the age of three with several musicians of the Galicia Symphony Orchestra. At the age of 10, she was a student of Liubov Lyutfalieva and concertmaster of the Galicia Symphony Children Orchestra. She has also studied with Sergey Teslya, Rima Mirzoyan, and Anna Mirzoyan. In 2012 she participated in the Musical Pilgrims Festival, performing as soloist at the Cathedral of Santiago and with the Santiago Philharmonic at the Auditorium of Galicia. She has played solo in many Galician venues and has taken part in chamber music festivals, including Peter de Grote in Gröningen (Netherlands), Verbier Music Festival (Switzerland), and the Classical Chamber Music Festival in La Rioja (Spain), where she had the chance to play with Tatiana Samouil and Sergey Ostrovsky.

As a student of the School, she has attended masterclasses by Krzysztof Wegrzyn, Natalia Prishepenko, Miriam Fried, Christian Tatzlaff, Alexander Lonquich, Ingolf Turban, Silvia Marcovici, Giovanni Guzzo, Linus Roth, Ana Chumachenco, and Ralf Gothóni (groups with piano). She has also been part of the Freixenet Symphony Orchestra, conducted by Pablo Heras-Casado, Péter Eötvös, Pablo González and David Afkham; the Sinfonietta conducted by Baldur Brönnimann and Johannes Kalitzke and that of the Fundación EDP Camerata under the baton of Anne-Sophie Mutter. She has been a member of the Banco Activo Universal Esferas and the Banco de España Arriaga ensembles, as well as that of the Prosegur Albéniz Quartet and Ensemble. She is currently part of the Deloitte Mozart Trio, with whom she was awarded the 2020 Mention to the most outstanding chamber group in the category of groups with piano.