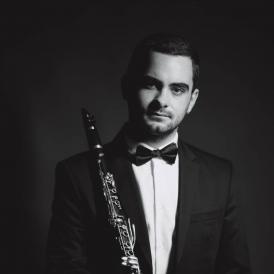 Born in Rafelguara, Spain, in 1994. Since 2018, he studies at the Reina Sofía School of Music’s Clarinet Chair with professor Pascal Moraguès, after having studied with Michel Arrignon. He has been granted a scholarship by Fundación Albéniz. In 2020 he received the Diploma to the most outstanding student of his chair.

He started his music education with professor José Miguel Puchades at the Ateneo Musical Society of Rafelguara. He later furthered his training at the Mestre Vert Professional Conservatory in Carcaixent under the guidance of Julio Juan Fresneda and Rosa Bordería. He completed his studies by winning the extraordinary prize of professional education in 2013. That same year, he began another training period at Valencia’s Joaquín Rodrigo Conservatory with Juan Ramón Beltrán and José Cerveró, with whom he obtained the highest qualifications. In 2017 he studied a Master’s degree in music research and specialised in contemporary music. He has attended masterclasses by Juan Doménech Calaforra, José Franch-Ballester, Enrique Pérez Piquer, Jonathan Kelly, Matthew Wilkie, and Joan Enric Lluna.

As a student of the School, he has been part of the Freixenet Symphony Orchestra, conducted by Andrés Orozco-Estrada, Víctor Pablo Pérez, Plácido Domingo, Pablo González and Pablo Heras-Casado; the Sinfonietta under the baton of Jorge Rotter and Johannes Kalitzke, and within Spain's World Heritage Cities Chamber Music series (Mérida). In 2021 he participated in the 30th anniversary tour of the School with the Freixenet Symphony Orchestra, conducted by Andrés Orozco-Estrada, with whom he performed at Madrid's Teatro Real, at Bratislava's Reduta Hall, at Budapest's Liszt Ferenc Academy and at Vienna's Musikverein. He has also been a member of the Stravinsky, Fundación Mutua Madrileña and Beethoven ensembles, the Esferas Quintet and Françaix Ensemble. He is currently part of the Casa de la Moneda Scarlatti Quintet.