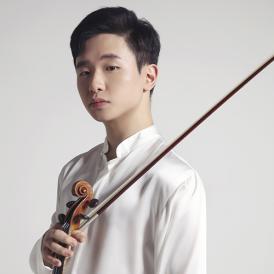 Born in Seoul, Korea, in 1999. Since 2021, he studies at the Hochschule München (Germany) with Christoph Poppen. He has performed at the Marvão festival in Portugal, and as soloist in Korea, Kazakhstan, Japan, and Russia. He has also performed with orchestras such as the Seoul Philharmonic and the National Symphony of Korea. He has won several competitions such as the Seoul International Music, the Kumho Arts Fund-Seoul Arts Centre, the Tchaikovsky Young Musicians Competition in Russia (of which he was jury in 2017), and the Youth Chamber Music Competition in Seoul. In 2019 he was awarded third prize at the Tchaikovsky International Music Competition. In 2022, he has been selected Artist-in-Residence at Kumho Art Hall in Korea. He plays a 1763 Joannes Baptista Guadagnini violin (Parma), loaned by the Kumho Asiana Cultural Foundation.