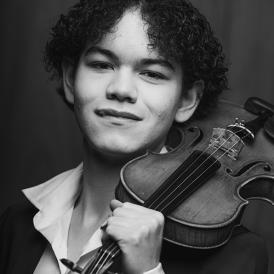 Born in Tokyo, Japan, in 2002. Since 2018, he studies at the Reina Sofía School of Music’s Telefónica Violin Chair with professor Zakhar Bron. He has been granted a scholarship by Fundación Albéniz.

He began his violin and piano studies at the age of seven in the Czech Republic, where he moved to when he was still a child. He has also studied with Zakhar Bron in Interlaken (Switzerland). Two years after learning to play the violin, he performed with Prague’s Philharmonic, as well as with other orchestras.

He has participated in festivals held in Germany, Switzerland, Austria, Russia and Czech Republic, as well as in Prague’s International Music Festival for Youth besides performing in a joint concert in the Bohuslav Martinů Festival; and in the Prague Spring International Music Festival. Maestro Vladimir Spivakov invited him to perform at the closing ceremony of Moscow Meets Friends International Festival and to go on tour around Russia with Moscow’s Chamber Orchestra. He has also participated in classical music programmes on the Czech radio and television and has performed before the Spanish royal family at the Palacio de El Pardo. He has also performed with the Naberezhnye Chelny Chamber Orchestra.

As a student of the School, he has attended masterclasses by Miriam Fried, Ingolf Turban, and Silvia Marcovici, and has been part of the Freixenet Symphony Orchestra, conducted by Víctor Pablo Pérez, Plácido Domingo and Andrés Orozco-Estrada. He has also been a member of the Banco Activo Universal Esferas Ensemble and is currently part of the Saint-Saëns Ensemble.