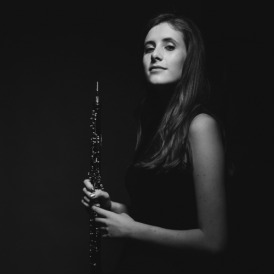 Born in Madrid, Spain, in 2002. Since 2020, she studies at the Reina Sofía School of Music’s Oboe Chair with professor Hansjörg Schellenberger. She has been granted scholarships by Consejería de Educación, Universidades y Ciencia de la Comunidad de Madrid and Fundación Albéniz.

She is full member of the Youth Orchestra and Choir of the Community of Madrid. In 2018 she passed the entrance exams for the World Youth Days Orchestra, with whom she has participated in several concerts at the National Auditorium, as well as at the Royal Theatre. She has performed as soloist with the Musical Union of Pozuelo de Alarcón and with the String Orchestra of the Amaniel Conservatory of Music. She has been part of different chamber groups, including the Amaniel wind quintet.

As a student of the School, she has been a member of the Freixenet Symphony Orchestra, conducted by David Afkham, and that of the Fundación EDP Camerata under the baton of Paul Goodwin. She has performed within the World Heritage Cities series in Cáceres, Córdoba and Cuenca. In 2021 she participated in the 30th anniversary tour of the School with the Freixenet Symphony Orchestra, conducted by Andrés Orozco-Estrada, with whom she performed at Madrid's Teatro Real, at Bratislava's Reduta Hall, at Budapest's Liszt Ferenc Academy and at Vienna's Musikverein. She has also been part of the Barroco Ensemble and is currently a member of the Esferas Quintet, the Poulenc Trio and the Françaix and Telemann ensembles.