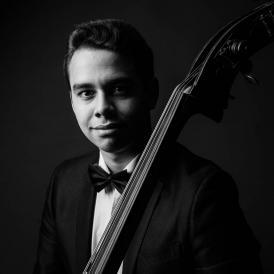 Born in Caracas (Venezuela) in 1998. Since 2016, he studies at the Reina Sofía School of Music’s Unidad Editorial Double Bass Chair with professor Duncan McTier. He has been granted scholarships by Juan Carlos Escotet Rodríguez (ABANCA) and Fundación Albéniz. He plays a French double bass from the 19th century, loaned as an instrument scholarship by Santiago Serrate. Her Majesty Queen Sofía handed him the Diploma to the most outstanding student of his chair in the 2018-2019 academic year.

He began his double bass studies at the age of ten at the Youth and Infant Orchestra and Choir National System of Venezuela through the Simón Bolívar Music Foundation in San Fernando de Apure. In 2011 he entered the Latin-American Double Bass Academy as a student of maestro Félix Petit. He has attended masterclasses by Janne Saksala, Wies de Boevé, and Matthew McDonald, and during the Santander Encounter of Music and Academy by Dušan Kostic. In 2015 he obtained the Honour Mention at the International Society of Bassists Competition in Colorado (United States), in its 15-18 years old category. He has been a member of the Youth Symphony Orchestra of Caracas, with whom he has participated in different tours around Europe and Asia.

As a student of the School, he has been part of the Freixenet Symphony Orchestra under the baton of Jaime Martín, Péter Eötvös, Andrés Orozco-Estrada, Plácido Domingo, and Victor Pablo Pérez. He has also been a member of the Banco de España Arriaga, Barroco, Banco Activo Universal Esferas, and the Stravinsky ensembles, as well as that of the Unidad Editorial Dittersdorf Quartet. He is currently a member of the Unidad Editorial Bottesini Double Bass Quintet.