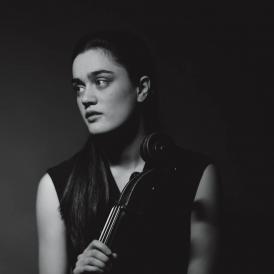 Born in San Lorenzo de El Escorial, Spain, in 2001. Since 2018, she studies at the Reina Sofía School of Music’s Aline Foriel-Destezet Cello Chair with professor Jens Peter Maintz. She has been granted scholarships by Consejería de Educación, Universidades y Ciencia de la Comunidad de Madrid and Fundación Albéniz. She plays a J. B. Collin Mezin cello (1982), loaned by the latter.

She has been awarded first prizes at national competitions, including Jaime Dobato Benavente (2014) and Soncello (2015), as well as second prize at the 7th David Popper International Competition (Hungary, 2017). She has also been selected to participate in the 2018 Talents Project of Madrid’s Symphony Orchestra. In 2015 she was part of the ORCAM Camerata conducted by Víctor Pablo Pérez and in 2017 that of Madrid’s Youth Orchestra. In 2015 she took part as soloist in Segovia’s Young Music Festival, organised by Fundación Don Juan de Borbón, and thanks to Fundación Arbós (Madrid’s Symphony Orchestra), she has performed at the Real Academia de Bellas Artes de San Fernando (2018), as well as at the National Auditorium (2019). In January 2020 she was also selected to take part in the Talents Project 19-20 of Madrid’s Symphony Orchestra.

As a student of the School, she has played with the Freixenet Symphony Orchestra, conducted by Péter Eötvös, Pablo González and Pablo Heras-Casado, and with the Sinfonietta, conducted by Baldur Brönnimann. She has also performed within The Rising Generation series at the National Auditorium. In 2021, she took part in the 30 Anniversary Tour of the School with the Freixenet Symphony Orchestra, conducted by Andrés Orozco-Estrada, performing at Teatro Real of Madrid, Reduta Hall of Bratislava, Liszt Ferenc Academy of Budapest and Musikverein of Vienna.
Furthermore, she has also been a member of the Casa de la Moneda Scarlatti Ensemble, the Prosegur Albéniz Quartet and Ensemble, the Puertos del Estado Haendel Quartet and that of the Amati Trio. She is currently part of the KPMG Schubert Ensemble and the Fundación Mutua Madrileña Ensemble.