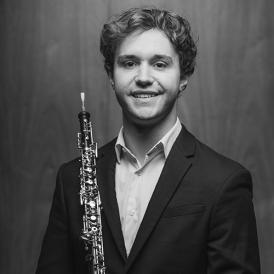 He started his oboe studies at Horcajo de Santiago’s Municipal School of Music with José Jaime Charco Izquierdo. He later entered Cuenca’s Pedro Aranaz Music Conservatory with Jose Juan Ortega, where he graduated with Honours in 2017. He furthered his studies at Valencia’s Joaquín Rodrigo Conservatory under the guidance of professor Vicent Llimerá Dus. He has also studied percussion.

Since 2017, he is oboe soloist at Castellón’s Youth Symphony Orchestra and, since 2019, at the University of Valencia’s Philarmonic Orchestra. He is also included in the Youth National Orchestra of Spain’s list of instrumentalists.

In 2017 he was awarded at the City of Cuenca Young Performers Competition the prize to best student of Cuenca’s Pedro Aranáz Conservatory.

As soloist, it is worth highlighting his performance of Vivaldi’s Concerto for oboe and bassoon under the baton of Ignacio Yepes at Cuenca’s Provincial Auditorium.

As a student of the School, he has performed with the Freixenet Symphony Orchestra, conducted by Andrés Orozco-Estrada; the Freixenet Chamber Orchestra, conducted by Sir András Schiff and Andrés Salado, and within the World Heritage Cities series in Segovia, Salamanca and Tarragona. He has been a member of the Barroco Ensemble. He is currently part of the O Globo Quintet and the D'Anches Trio.