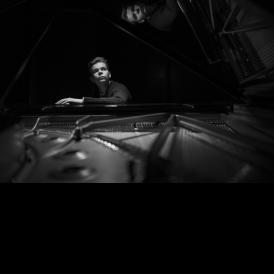 Born in St. Petersburg, Russia, in 1999. Since 2019, he studies at the Reina Sofía School of Music’s Fundación Banco Santander Piano chair with professor Galina Eguiazarova. He has been granted a scholarship by Fundación Albéniz.

He started his music education in 2008 at St. Petersburg’s School of Music with M. Yakimchuk and furthered his studies at the Special Music School of the Rimsky Korsakov State Conservatory with Zora Zucker. He has also received classes from Miroslav Kultyshev and attended masterclasses by Rena Shereshevskaya, Stanislav Ioudenitch, and Elisabeth Leonskaja.

As a student of the School, he has been a member of the Expresionista Trio and is currently part of the Areti Duo.