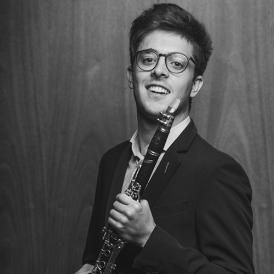 Born in Domodossola, Italy, in 2001. Since 2021, he studies at the Reina Sofía School of Music’s Clarinet Chair with professor Pascal Moraguès. He has been granted a scholarship by Fundación Albéniz.

As a student of the School, he is a member of the D'Anches and the Mistral trios.