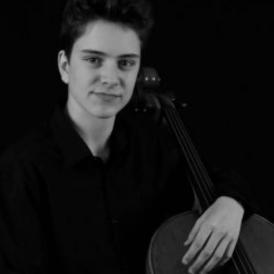 Born in Barcelona, Spain, in 2005. Since 2019, he studies at the Reina Sofía School of Music’s Aline Foriel-Destezet Cello Chair with Professor Jens Peter Maintz. He has been granted a scholarship by Fundación Albéniz.

He began his cello studies at the age of six and from 2015 onwards, he was a student of Anna Mora at the Grupcello.cat, which she conducts. He later continued his training at Tarrasa’s Conservatory with Lluís Heras and studied within the Cassadó Chair of the Marshall Academy.
He has attended classes by Lluís Claret and Iagoba Fanlo, and has participated in masterclasses by Pablo Ferrández, Michel Strauss, Wolfgang Emanuel Schmidt, Asier Polo, Ralf Gothóni, Oliver Wille, and Alban Gerhardt.

As a student of the School, he has been a member of the Freixenet Symphony Orchestra, conducted by David Afkham, and that of the Casa de la Moneda Scarlatti Ensemble and the Ramales Quartet. He is currently part of the Ambage and Management Solutions Tchaikovsky ensembles.