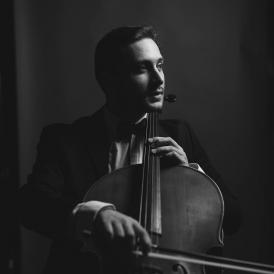 Born in Yerevan (Armenia) in 1994. Since 2017, he studies at the Reina Sofía School of Music’s Aline Foriel-Destezet Cello Chair with professor Ivan Monighetti. He has been granted scholarships by Havas Group and Fundación Albéniz.

From 2003 to 2010 he studied at the Sayat-Nova School of Music in Yerevan with professor Tiruhi Sargsyan, from 2010 to 2013 at the Yerevan Komitas State Conservatory with Armen Mesropyan, and from 2013 to 2015 at the Hochschule für Musik Carl Maria von Weber in Dresden with Ramon Jaffe. He has attended masterclasses by Frans Helmerson during the 2018 Santander Music and Academy Encounter, and by Torleif Thedéen, Gautier Capuçon, and Wolfgang Emanuel Schmidt. Since his childhood, he has been awarded in several national and international competitions and has performed on tours around United States, Canada, France, Italy, Spain, Netherlands, and Germany, offering chamber music concerts and recitals as soloist. He has played in orchestras such as the Armenian National Philharmonic, Youth State Symphony, and Kammerakademie Halle. He has also participated in renowned festivals, including the Bayreuther Osterfestival and Cello Akademie Rutesheim (Germany), Semper Music Festival (Italy), Renaissance (Armenia), and Middelburg Music Festival (Netherlands).

As a chamber musician, he has collaborated with artists Zakhar Bron, Felix Renggli, Natalia Prishepenko, and the Khachaturian Trio. He has worked with composers Helmut Lachenmann, Paul Patterson, Tigran Mansurian, and Vache Sharafyan, and has been conducted by maestros Jesús López Cobos, Josep Caballé-Domenech, Simon Gaudenz, and Matthias Foremny. As a member of the School’s Freixenet Symphony Orchestra, he has also been conducted by Víctor Pablo Pérez, Jorge Rotter, Anne-Sophie Mutter, Plácido Domingo, Andrés Orozco-Estrada, András Schiff, and Juanjo Mena.

He is currently part of the BP Mendelssohn Quartet and the Fundación Mahou San Miguel Trio, ensembles Her Majesty Queen Sofía awarded the 2018 Mention to the most outstanding chamber group in the category of string quartets and piano groups.